Developed by Centropa, the Bureau of Memory Culture, the Chernivtsi Museum of the History and Culture of Bukovinian Jews and NGO Mnemonics, this AudioWalk allows you to learn more about the unique multiethnic history of Chernivtsi, a city which today is located in southwestern Ukraine, but was once part of the Habsburg Empire, and known for its vibrant Jewish life.

This AudioWalk tells the Jewish history of Chernivtsi through eight personal stories of Jewish Holocaust Survivors who shared their memories in Centropa interviews. They will be your guides through the town, and to the places you are about to visit.

About the Chernivtsi AudioWalk

This AudioWalk has been developed by the Jewish historical institute Centropa and the Bureau of Memory Culture Babenhausen. Its goal is to bring the Jewish history of Chernivtsi back to life.

Produced in cooperation with the Chernivtsi Museum of the History and Culture of Bukovinian Jews, it includes archival material historically researched by Mykola Kuschnir, Holger Köhn, Christian Hahn and Fabian Rühle.

Until World War II, Chernivtsi had a unique cultural and linguistic diversity, making the city internationally renowned. The AudioWalk focuses on various locations of Chernivtsi´s Jewish life, offering the user an insight into the city´s unique Jewish history.

The AudioWalk combines historical context with personal stories shared by eight Jewish Holocaust survivors who were interviewed by Centropa.

They take us into the Chernivtsi of their childhood and youth – and they share with us the unique atmosphere of this multi-ethnic city before World War II. We also learn about the horrors of the War and the years under Soviet rule until 1991.
These personal stories bring back the Jewish life of Chernivtsi, where today, still around 1,000 Jews live.

For a long time, the Jews of Chernivtsi have greatly impacted life in the city on the Pruth river. When Bukovina was incorporated into the Habsburg monarchy in 1774, around 100 Jewish families lived in Chernivtsi. The first Jewish community existed in the early 18th century. At the end of the 18th century, Jews were granted their first rights, for example allowing them free choice of their profession. With the new constitution of 1849 and other significant changes in 1867, the Jews of Bukovina finally received full legal equality within the Habsburg monarchy.

Restrictions on property rights were lifted, and Jews were given freedom of movement. These developments allowed for a Jewish middle class to be established. As a result, a large number of Jews from the surrounding regions – especially from Galicia, Bessarabia and Moldavia – moved to Chernivtsi. This led to an increase of the number of Jews living in Chernivtsi from 5,000 to around 17,500 between 1850 and 1890.

During this time, the Jewish community significantly shaped the city’s press and theater culture. Jewish architects, hoteliers, bankers and board members from various professional associations were important figures in social life. Jews held a prominent position in trade and in some craft sectors, such as watchmakers, carpenters and shoemakers. From the early 20th century on, Jews formed the majority of private doctors, lawyers, teachers and other civil servants. Jews also played an important role in politics. In the early 20th century, they were represented on the municipal council, and Eduard Reiss and Salo Weisselberger were the first two Jewish mayors of the city.

Since the middle of the 19th century, Chassidic Orthodox Jews and Reformist Jews formed two distinctly different factions among the Jews of Bukovina and its capital Chernivtsi. While the majority of rural Bukovinian Jews spoke Yiddish and adhered to Orthodox traditions, most Jews in Chernivtsi spoke German and were influenced by German-Austrian culture: Jewish children in the city mostly attended German-language state schools, and Jewish newspapers were published in German.

In general, Jews made a significant contribution to the German-Austrian culture of the city.

In 1910, around 28,000 Jews lived in Chernivtsi, forming the largest ethnic group with just under 33% of the total population. At that time the Jewish community was the third biggest in the entire Habsburg Empire – only surpassed by the communities in Vienna and Lviv. By and large, Jews, Romanians, Ukrainians, Germans and Poles lived peacefully side by side until World War I broke out in 1914.

When Chernivtsi was occupied several times during the war, the city saw anti-Semitic attacks under Russian administration. After the war, Chernivtsi became part of the Kingdom of Romania, and was now called called “Cernauti”. Restrictions for Jews increased – but so did the proportion of Jews among the total population in Chernivtsi, due to the influx of Jews from Bessarabia. In 1919, made up over 47% of the total population, and even in 1930, Jews still made up the largest ethnic group in the city with 37% or around 43,000 people.

Bruno Bittmann, who was born in Chernivtsi in 1928, recalls in his Centropa interview from 2004 the atmosphere in the city of his childhood and youth:

Once nicknamed ‘Little Vienna of the East’, Chernivtsi was a modern city and had 150,000 inhabitants. I remember the summer tram with open wagons and the winter tram with closed wagons. Almost half of the residents were Jews. Most of them felt they belonged to German culture. There was a university, theaters, cinemas, coffee houses, and Chernivtsi was a literary city. Many writers and artists lived there: Karl Emil Franzos, the first to achieve international fame, Rose Ausländer, Moses Rosenkranz, Paul Celan, Selma Meerbaum, Gregor von Rezzori, Elieser Steinbarg, Itzig Manger and the famous tenor Joseph Schmidt and many others who felt comfortable in the atmosphere of Chernivtsi. With Paul Celan, the world-famous poet, at that time his name was Paul Antschel, and my family was close friends with his parents.

During the Soviet occupation, from June 1940 to July 1941, all Jewish organizations were banned and dissolved. About 3,000 Jews were deported to Siberia. Following the attack on the Soviet Union, German and Romanian troops occupied the city in July 1941, and thousands of Jews were shot. In October 1941, the Romanian administration established a Jewish ghetto and began to deport tens of thousands of Jews to the hell of Transnistrian camps. About 15,000 Jews from Chernivtsi survived the war. Many emigrated to Romania, Palestine or the USA in 1945/46. The city was now called “Cernovtsi” and part of the Ukrainian Soviet Socialist Republic.

In 1989, shortly before the collapse of the Soviet Union, 15,600 Jews lived in the city. Since then, the number of Jews in what is today called “Chernivtsi” has continually decreased. Thousands of Jews emigrated to Israel or the USA in the 1990s, others moved to Kiev or Lviv. Today the Jewish community of Chernivtsi has around 1,000 members. The Jewish community is now located in the former Jewish National House on Theater Square, which also houses the Museum of the History and Culture of the Bukovinian Jews. Two synagogues and a Jewish school still belong to the Jewish community.

However, there are also numerous buildings in the city that are reminiscent of the once thriving Jewish life. Often there is little reference to the former use of a building as a synagogue, as a Jewish cultural center or school, as a Jewish hospital or orphanage. The AudioWalk offers the opportunity to trace these Jewish memorial sites. Excerpts from Centropa interviews, with stories of Jewish contemporary witnesses from Chernivtsi, enrich the walk with personal memories of bygone days, happy moments as well as cruel events.
Explore the rich Jewish history of Chernivtsi! We hope you will enjoy our AudioWalk!

Explore the Chernivtsi AudioWalk along its main topics

… and learn more about each topic on these sub-pages:

All stations from the Chernivtsi Audiowalk 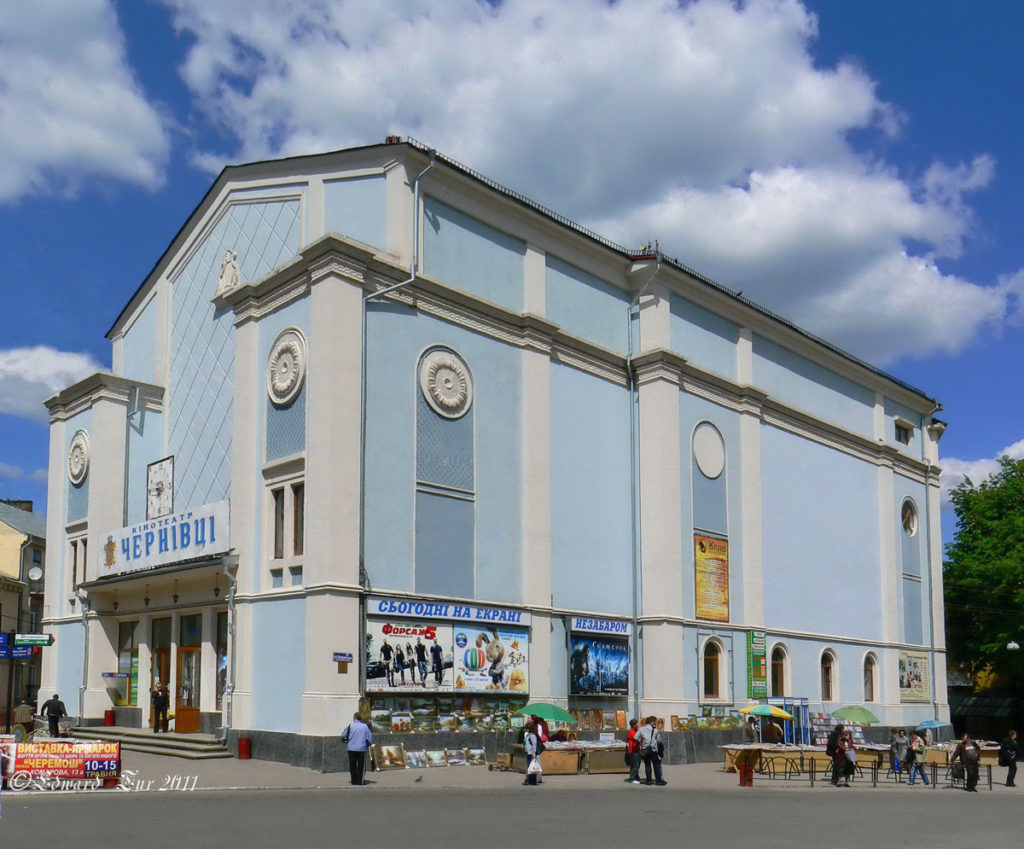 “We went to the big temple on special occasions, like the high holidays or a wedding, and it was always full, you had to buy seats for this beforehand from the Jewish community […]” – Melitta Seiler 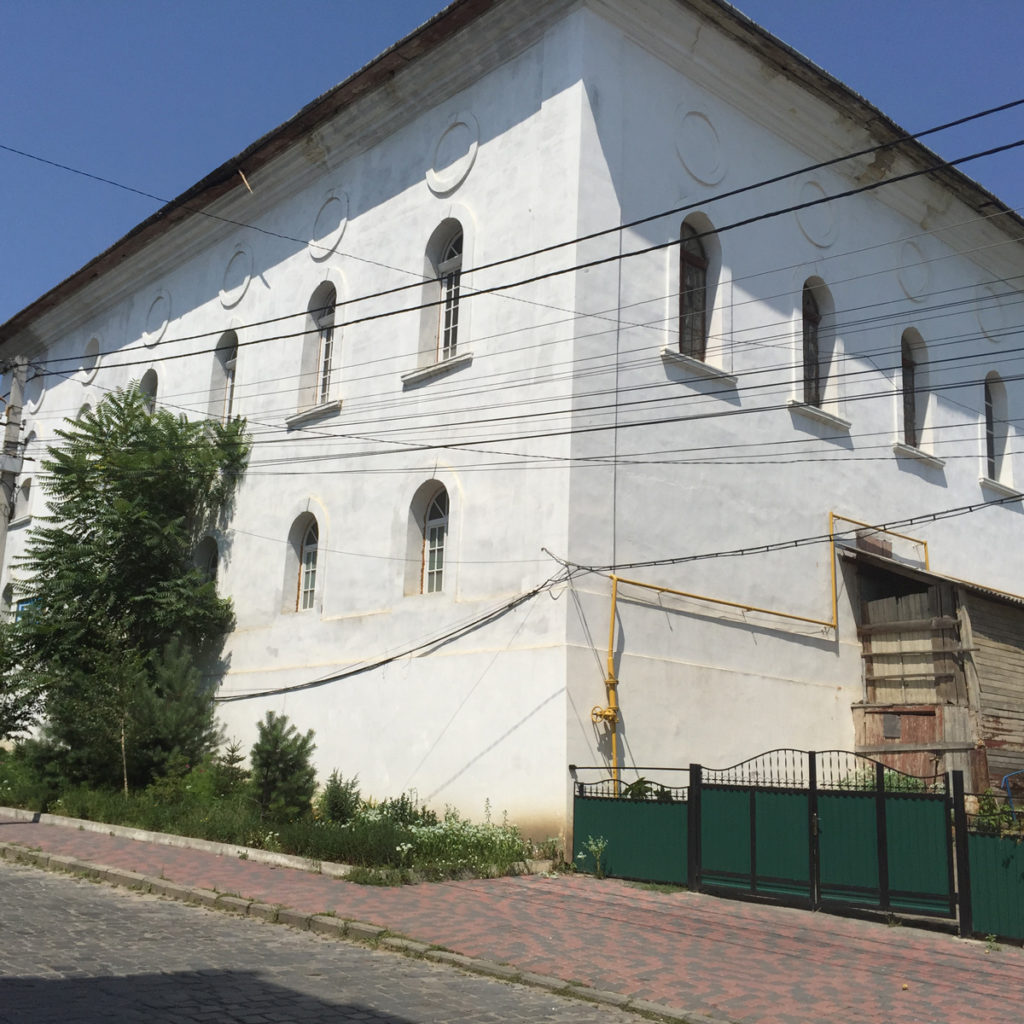 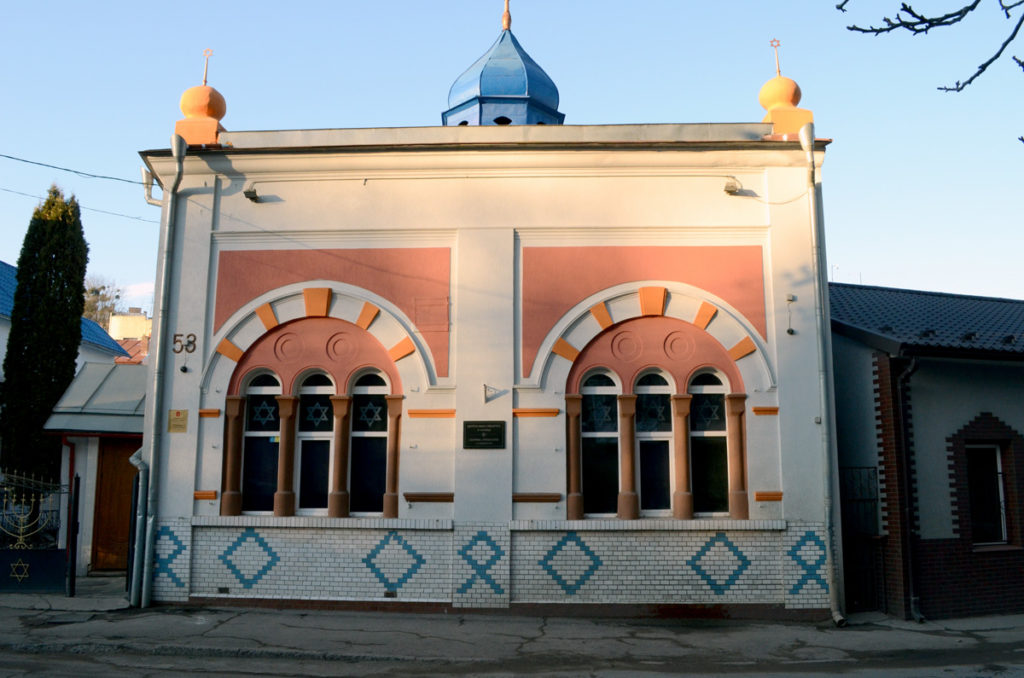 The Beit Tfilah Benyamin synagogue played an important role for Jewish life after 1945, as it became the only functioning synagogue for decades. 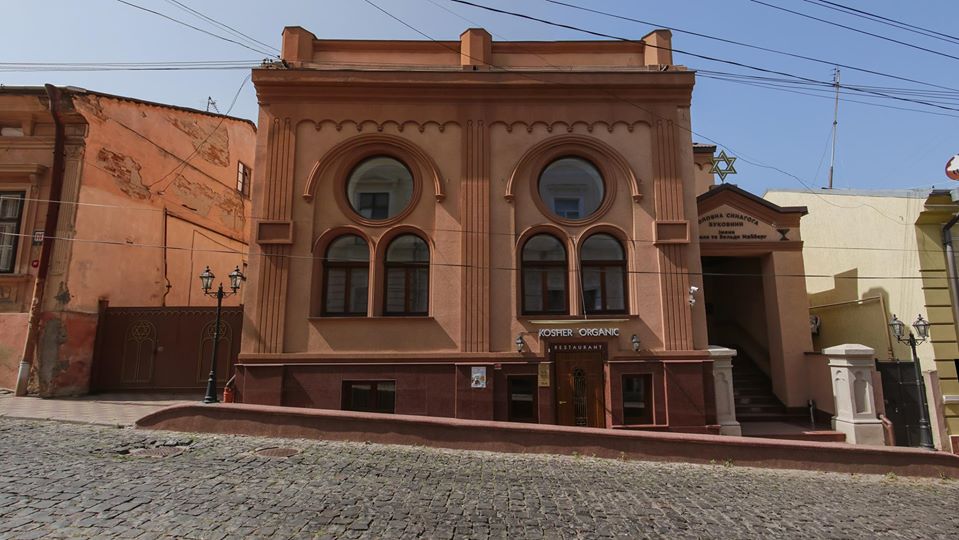 Main synagogue of the Bukovina

The former praying house of the Korn family, on Sadovskoho Street 11, today houses the Main Synagogue of Bukovyna. Aside from the Bei Tfilah Benyamin synagogue, this is currently the only active synagogue in Chernivtsi. 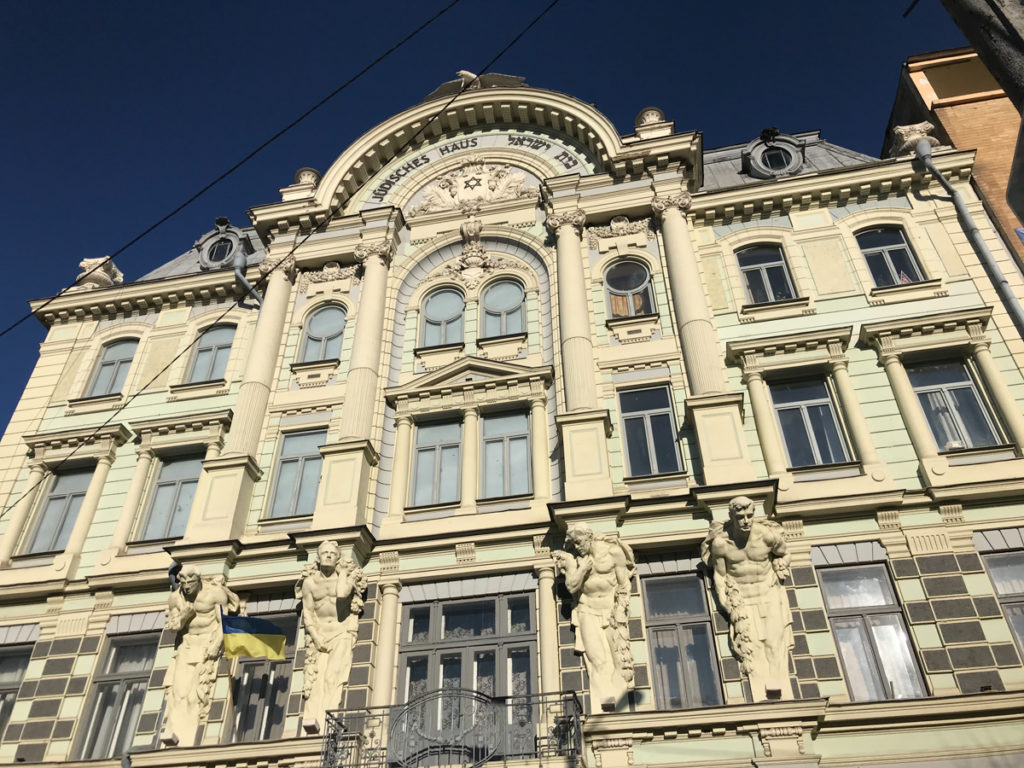 This grand building opened in 1908, and soon became the home of Chernivtsi’s Jewish community and Jewish institutions. Today, it’s also the location of the Chernivtsi Museum of the History and Culture of Bukovinian Jews – and the starting place of this AudioWalk. 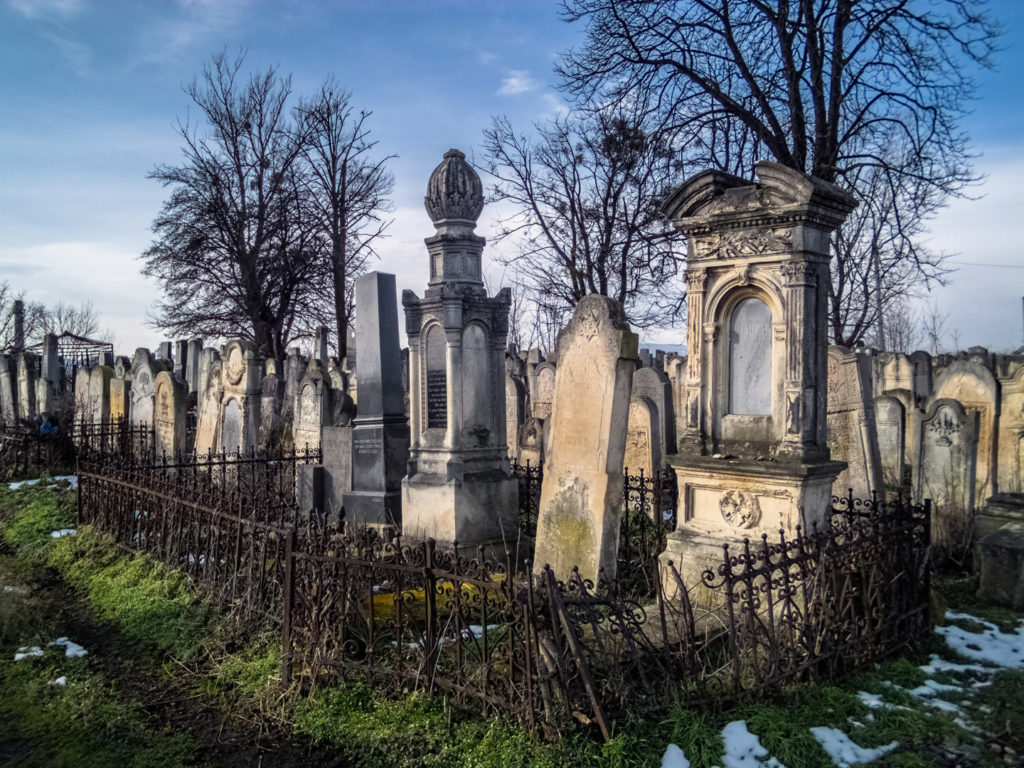 Chernivtsi’s impressive Jewish cemetery is located a bit outside the city center. With an estimated 50,000 tombs, the cemetery is one of the largest Jewish cemeteries in Central and Eastern Europe, and a testimonial to the city´s rich Jewish heritage. 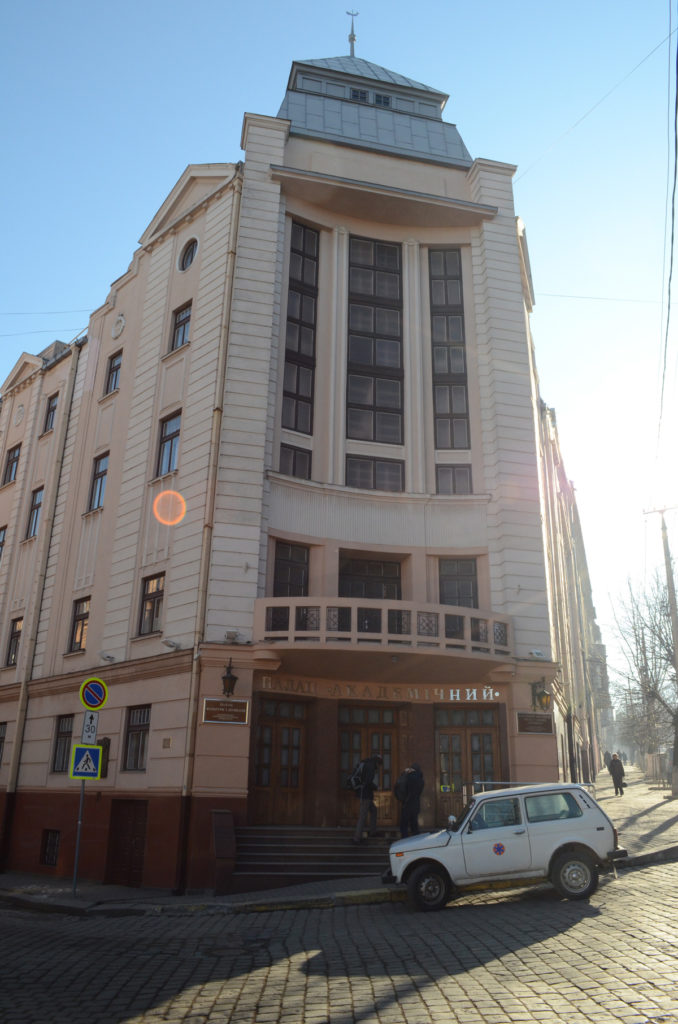 “Morgenroit” was an organization of “Bund”, the Jewish section of the Social Democratic Party, which established the Morgenroit Cultural House in 1908 as an educational and cultural center for Jewish workers. 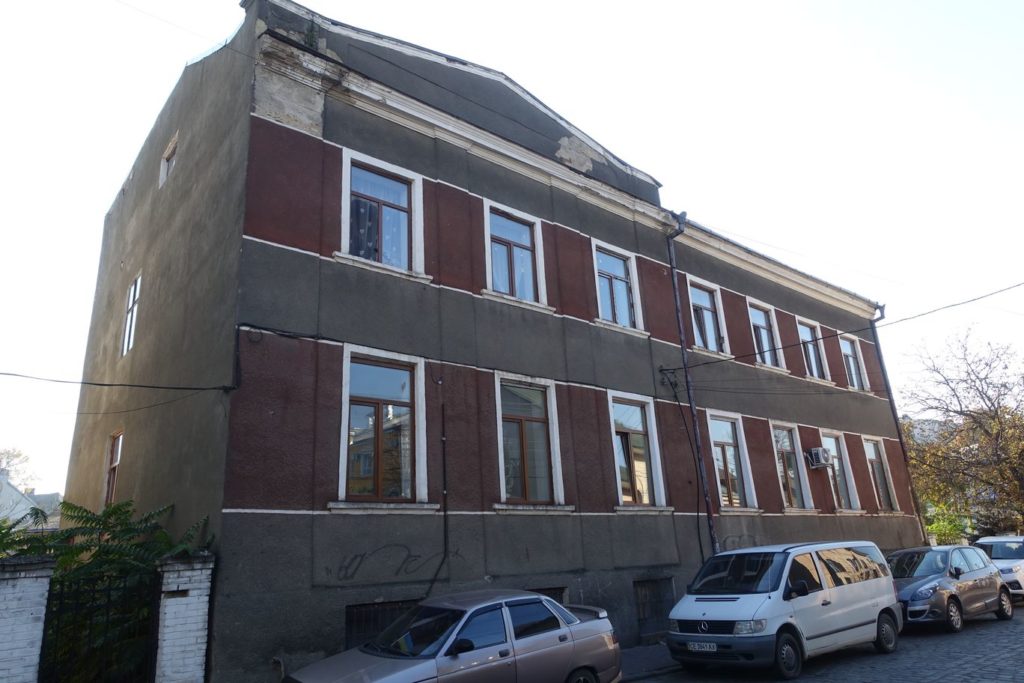 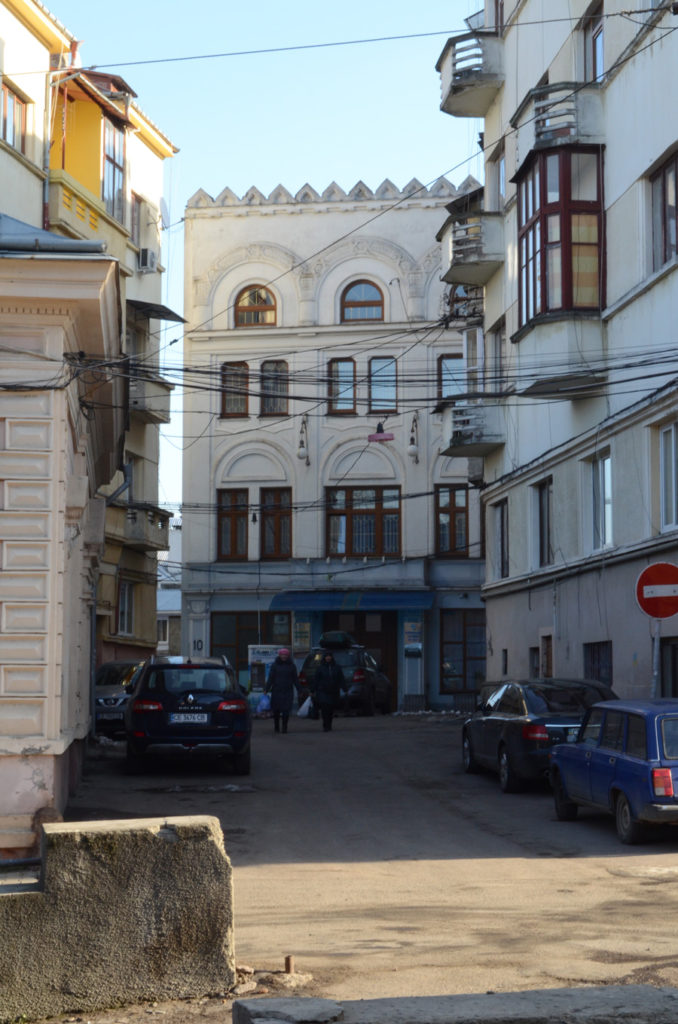 Toynbee Hall opened in 1913 and soon became a hub for interwar Jewish culture. This is also where social and political meetings would take place – until it was closed in 1940. 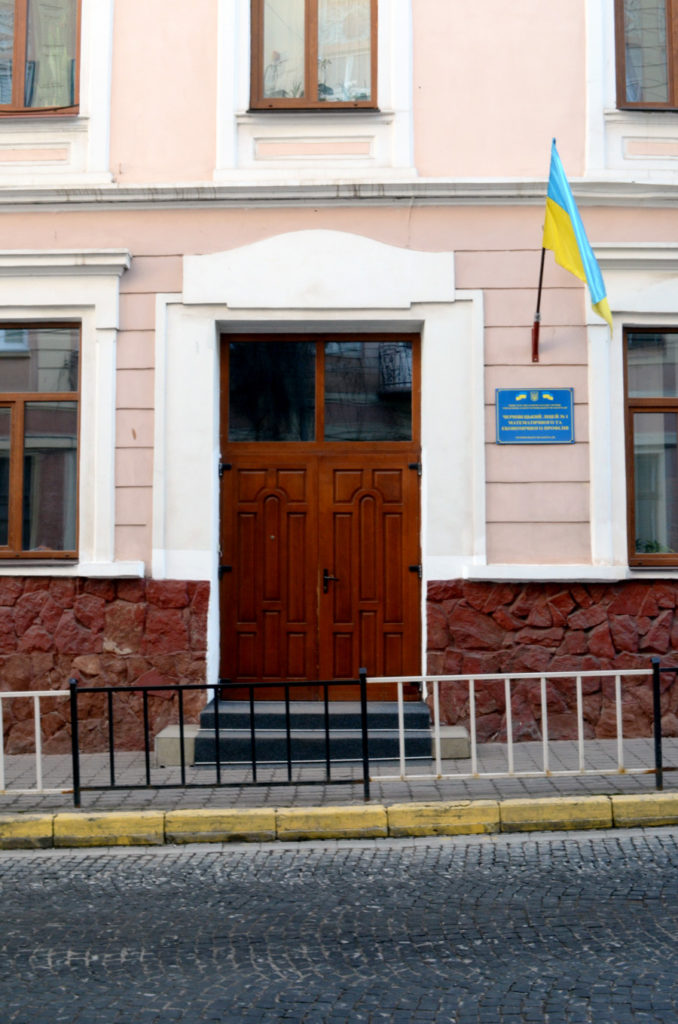 Until the mid-19th century, Jewish children in Chernivtsi studied only in illegal religious schools. After a public education reform, the Jewish primary school opened in 1855.

The Jewish orphanage “Emperor Franz Joseph Jubilee Orphanage for the Israelites in Czernowitz” opened in 1904. It was administered under the guidance of the Board of the Jewish community until its nationalization in 1941. 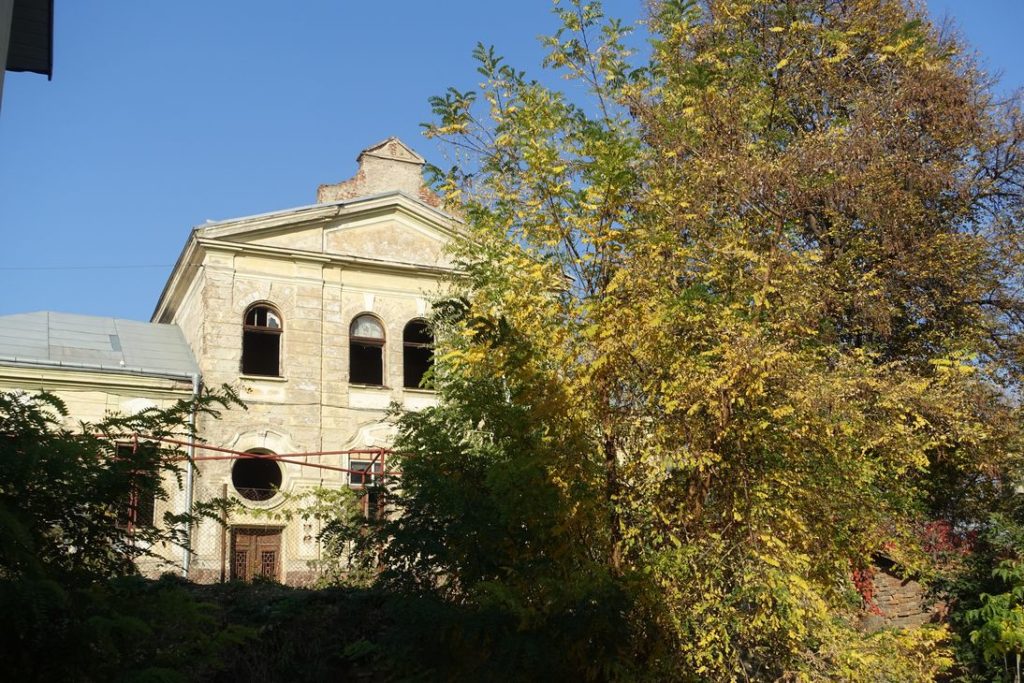 Israelite Home for the Elderly and Invalid

The Home for the Invalid and Elderly opened in 1911 and was the last big project of the Jewish community of Chernivtsi during the Habsburg period. With the adjoining Jewish hospital, it became part of the territory of the Ghetto in 1941. 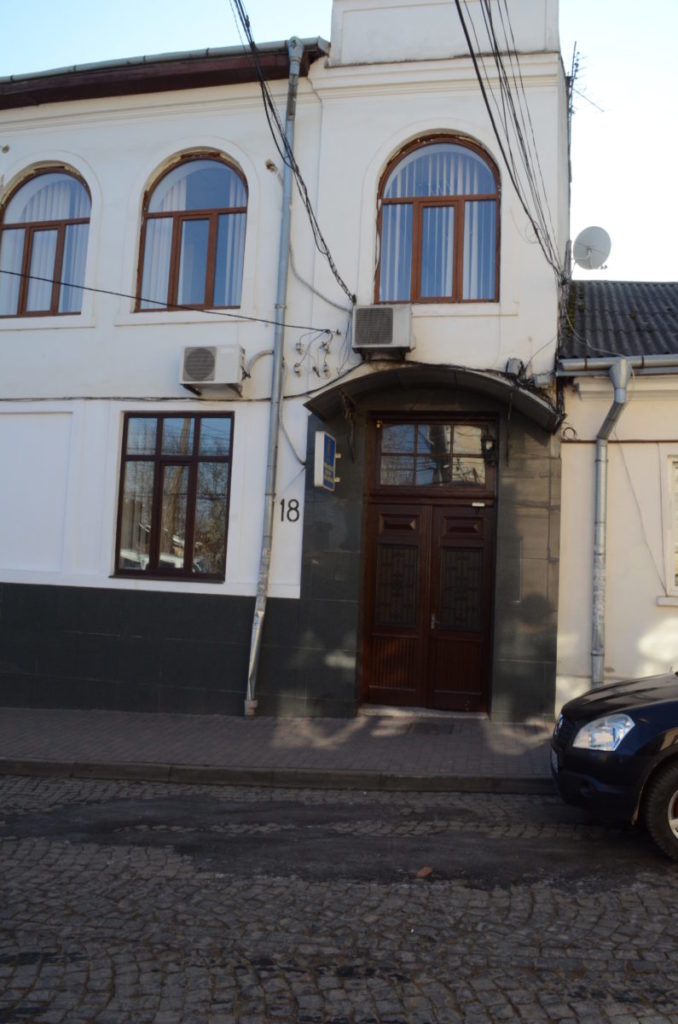 Established in 1894, the organization “Machsike Shabbat” supported poor members of the local Jewish community in Chernivtsi until 1940.

Known by many for his poem, “Death fugue”, Paul Celan was one of the famous German-language poets of the post–World War II era. Visit the house where his family lived in his hometown Chernivtsi, and where Paul grew up in the 1920s and 1930s before emigrating to Paris.

“Why am I writing? Maybe because I was born in Czernowitz, because the world came to me in Czernowitz. That special landscape. The special people. Fairy tales and myths were in the air, you could breathe them in.” – Rose Ausländer 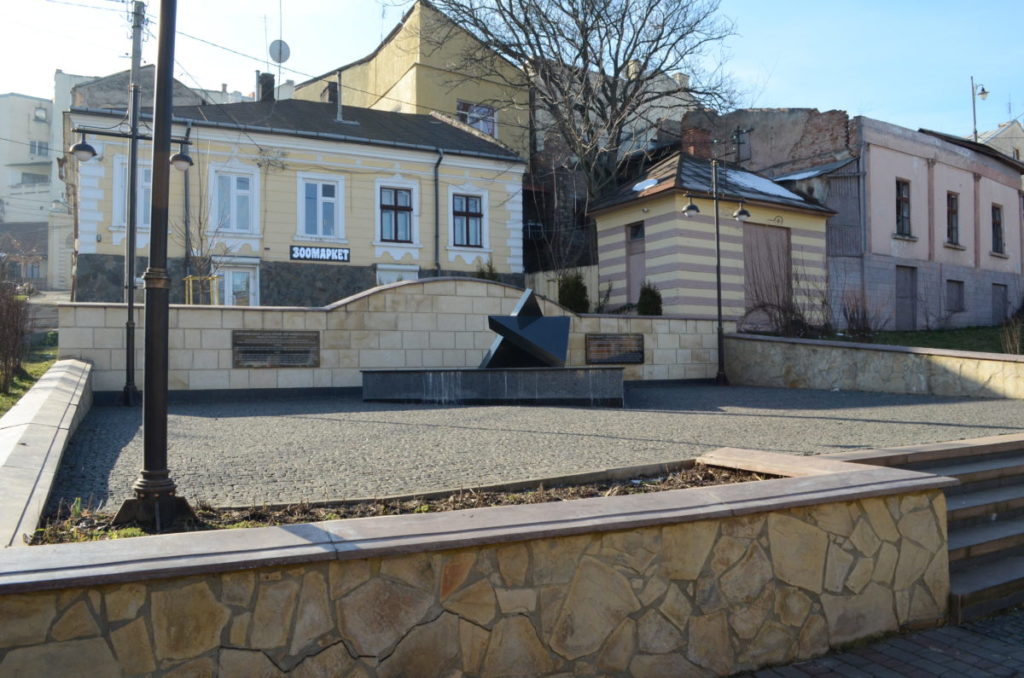 On July 5, 1941, German troops occupied Chernivtsi. All Jews had to go to the ghetto [...] We were eight or nine people in a small basement apartment, but others were worse off. We were only allowed on the streets at certain times.- Bruno Bittmann 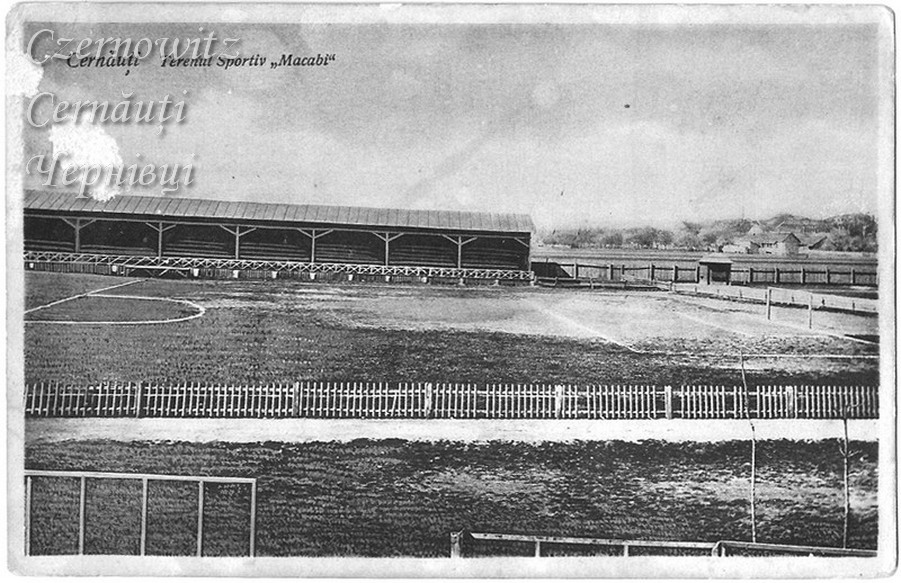 “My brother was a member of the Maccabi soccer team since he was ten. The team would even travel to Bucharest and play against Maccabi Bucharest.” - Sylvia Segenreich 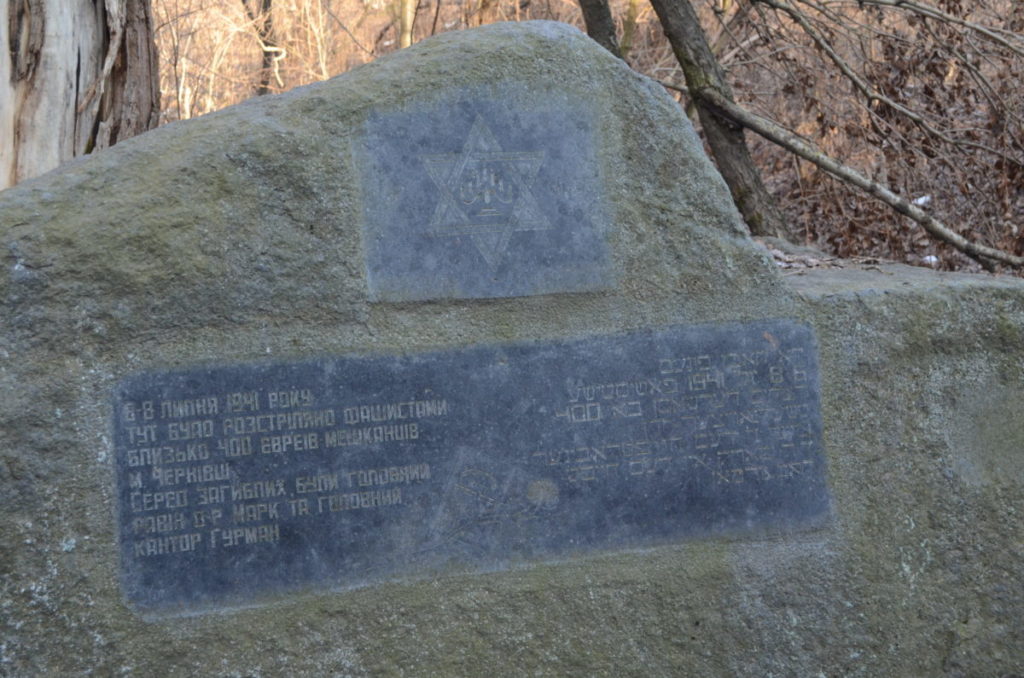 Monument to the victims of mass shooting in July 1941

In a forest not far from the Prut River, a monument with a Star of David and a menorah commemorates the 400 Jews who were shot by German troops in early July 1941, in the first few days after German and Romanian troops had invaded the city. 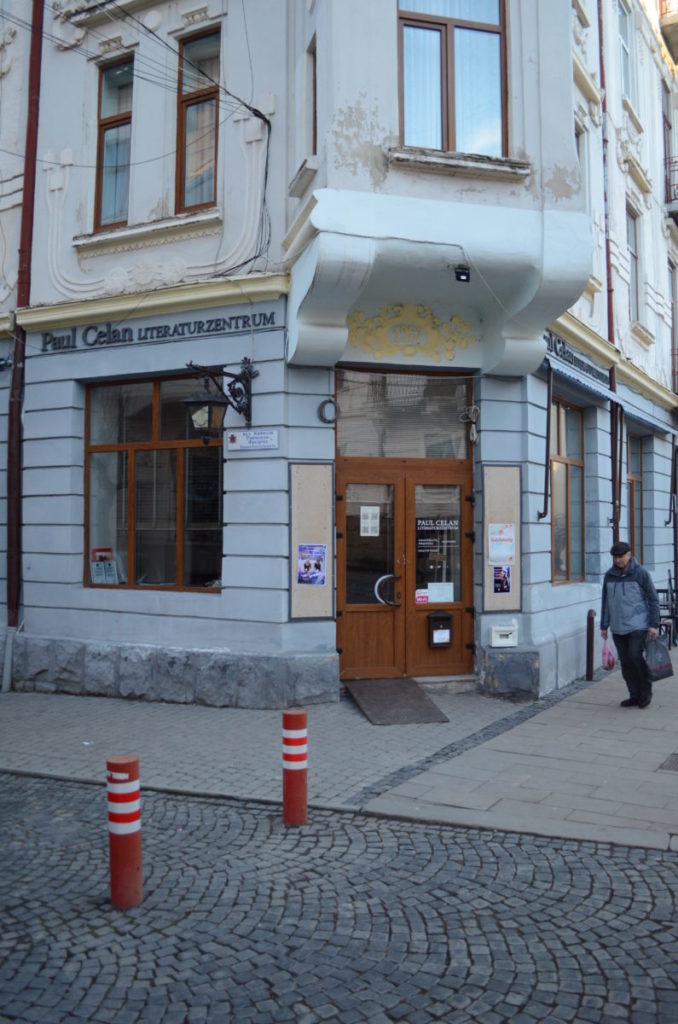 The Celan Literature Center is located near Paul Celan's birthplace.

A monument on Holovna street is dedicated to the famous Poet Paul Celan.

A monument is dedicated to the famous daughter of the city. 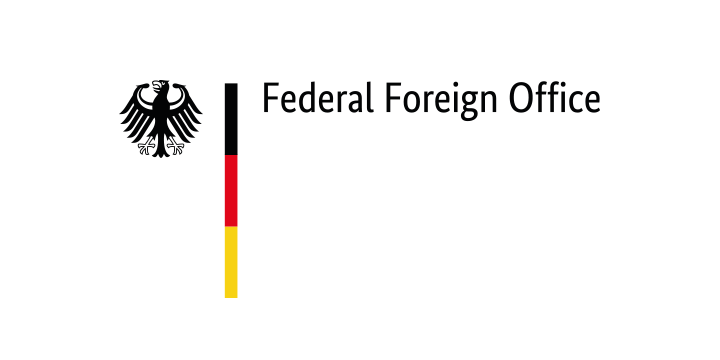 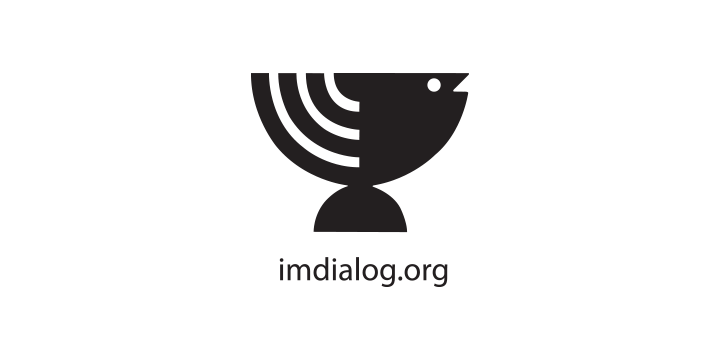